Explainer: What is green hydrogen? 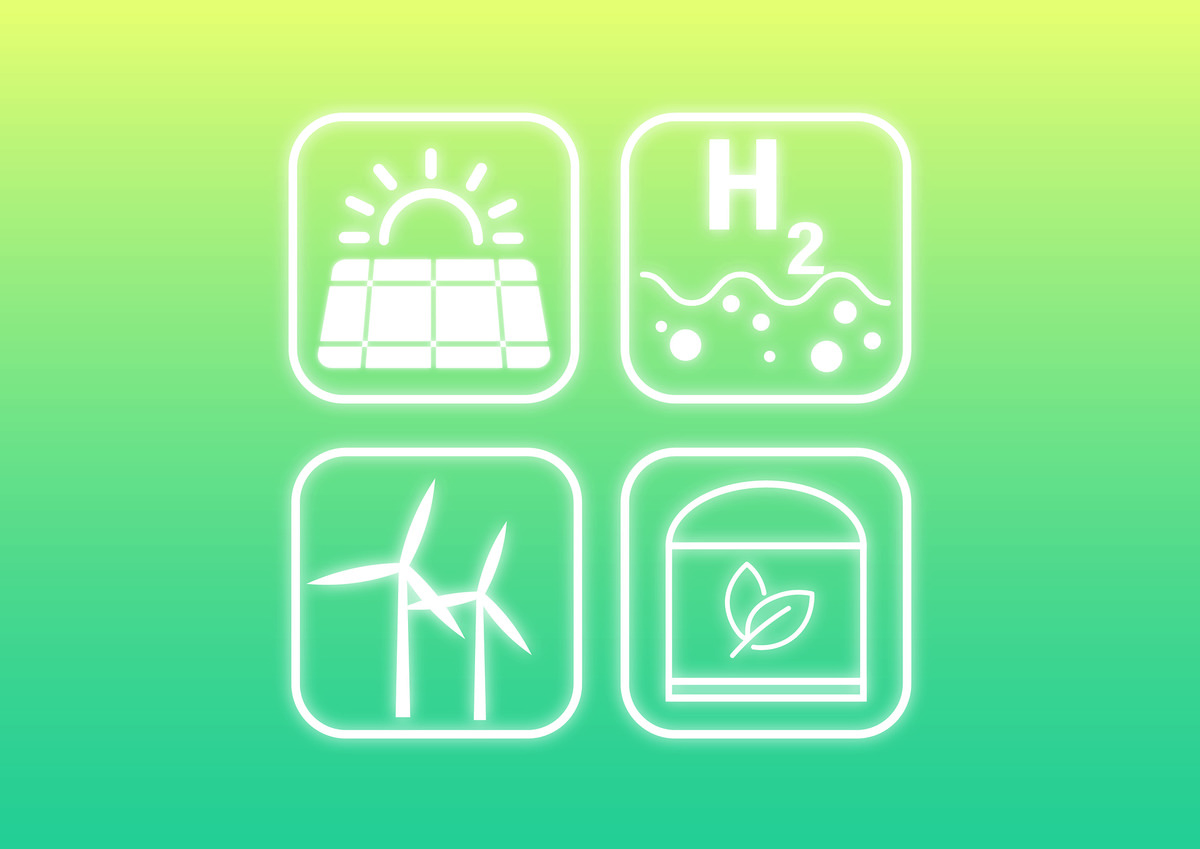 As global economies transition to sustainable energy (more quickly, please) and net-zero emissions, many are looking to hydrogen fuel as a promising enabler. Since the Hindenburg disaster, skeptics sound the alarm bells whenever hydrogen fuel enters the chat. But today, with proper engineering controls, hydrogen can be as safe as - if not safer than - any other fuel in widespread use. Remember how the ocean was literally on fire? Or, you know, Chernobyl?

Hydrogen is the simplest and smallest element in the periodic table, and there is no disputing that it is highly flammable and easy to ignite. But - it’s lighter than air (propane and gasoline vapor are heavier), which means when released, hydrogen will rise and disperse rapidly, reducing the risk of ignition at ground level. It also requires much less oxygen for explosion than fossil fuels, and it’s non-toxic, so a spill will not contaminate the environment or threaten health.

A gas of many colors

Hydrogen is a colorless, odorless gas. We use colors to describe the production process. Hydrogen fuel is produced either through natural gas reforming (from methane) or by the electrolysis of water. Electrolysis is a technique to drive a non-spontaneous chemical reaction using a direct electrical current.

Although hydrogen only emits water when burned, creating it can emit a lot of carbon. Currently, most hydrogen production is brown or grey hydrogen - hydrogen produced using coal or natural gas, in which carbon dioxide is a by-product (just 800 million tonnes, or more than the total emissions of Belgium). Blue hydrogen is made from natural gas too, but the production process includes recapturing and storing some of the CO2 produced - roughly half the amount in most carbon capture systems.

Why is green hydrogen important?

We need to decarbonize everything and electrification is not an immediate solution for some industries. Renewables can’t produce enough yet to consistently power them - particularly in heavy industry (chemicals, iron, steel) and long-haul transportation (shipping, freight, aviation). Grey hydrogen is already used widely as feedstock in the production of fertilizer, steel, and oil refining - switching existing infrastructure to green hydrogen can decarbonize existing industry demand, taking a chunk out of about 24% of US emissions.

Green hydrogen has many potential applications, from heating to long-term energy storage, especially for harnessing renewable energy that would otherwise be wasted. It could also replace gas and diesel vehicles, but because of the current production costs of hydrogen fuel cells, the best path forward for passenger vehicles is electric.

If you take anything away from this article, let it be this: green hydrogen is NOT a replacement for electrification. Both play a part in the clean energy transition. You can’t have poutine without gravy AND cheese curds (if you know, you know). We need both direct electricity and green hydrogen to decarbonize our world.

Energy efficiency, renewables, and direct electrification are the bulk solutions that we need to prioritize scaling up right now. Green hydrogen is necessary for a net-zero economy, but the clock is ticking, and we can't afford to waste time and resources applying hydrogen to sectors where electricity is an easier switch.

On Earth, hydrogen mainly exists as an essential component of water. Producing hydrogen gas via electrolysis is energy-intensive and expensive. Green hydrogen storage is difficult because it requires extremely high pressures or low temperatures, which adds to the cost. Scaling green hydrogen requires vast amounts of renewable power and subsidizing the cost of electrolyzers.

Renewable energy is driven by capital, while green hydrogen production is driven by operational expenditure. Most of the cost depends on the price of electricity, so to make green hydrogen economically worthwhile (because, capitalism), we need policies that will make electricity prices expensive enough for renewable power to be viable (why should companies make the switch?) and cheap enough to be competitive with gas (why should consumers make the switch?).

When hydrogen gas escapes into the atmosphere, it combines with other molecules and indirectly increases other greenhouse gases such as methane, tropospheric ozone, and stratospheric water vapor. It will do this regardless of how it is produced, but these indirect effects have been understated in reports because the warming effects only last a few decades rather than centuries.

The impact this will have on the climate depends on how much hydrogen is allowed to escape as production increases in the next few decades. Right now, we don't know how much escapes because we aren't detecting small leaks that don't matter for safety but have implications for the climate.

Green hydrogen production can be great for the climate - as long as we take all risks into consideration during development, and plan for leak prevention from the jump.

There is debate about using blue hydrogen as a transition fuel instead of green hydrogen. It is a more cost-effective (in the short-term) and immediate low-carbon alternative to grey hydrogen. But low-carbon isn’t zero carbon.

Blue hydrogen doesn't make sense when the ultimate goal is a net-zero economy. Why should a company invest in an expensive carbon capture system for blue hydrogen, only to eventually have that system become a stranded asset once green hydrogen becomes cheaper? Wouldn’t it make more sense - economically and for the planet - to focus on scaling up green hydrogen as much as possible and as soon as possible instead?

As we scale up renewable power generation, the cost of renewable electricity will continue to fall. We need to prioritize by using green hydrogen to decarbonize existing grey hydrogen infrastructure, and scaling to reduce the cost of electrolysis and make green hydrogen competitive now.

Government and private industry have started to invest in green hydrogen projects, including Big Oil like Shell and BP. The EU has proposed a trillion-dollar Green Deal package that includes an EU-wide green hydrogen strategy. Japan is allocating billions on R&D for hydrogen, with plans to increase hydrogen demand from 2 to 3 million tonnes/year by 2030, accelerating to 20 million tonnes/year by 2050. The US has proposed 8 billion dollars from the bipartisan infrastructure bill to develop four regional production hubs across the states for clean hydrogen, although some of those projects include blue hydrogen.

The Green Hydrogen Catapult is a UN initiative to scale up green hydrogen production capacity by 50 times, deploy 80 gigawatts (GW) of renewables-powered electrolyzers and achieve a 50 percent cost reduction by 2026.

Oh and also, Green Hydrogen International has recently announced a 60GW Hydrogen City project in Texas that will use renewables to produce hydrogen, store it, convert it to ammonia…and with a use of resources that’s definitely good for everyone, provide clean rocket fuel for Elon Musk. So, good for him, I guess?

What can you do?

Green hydrogen will likely be key to achieving a net-zero economy, but the emissions it will address are primarily in heavy industry so unless you’re the head of an ammonia plant, your best bet (aside from voting for people who will take climate action) is to electrify your life as much as you can.

Heat and cool your home using a heat pump. If you need a new car, consider switching to an electric vehicle. Take Rewiring America’s Mayor’s for Electrification plan to your townhall to get your municipality onboard. Invest to scale climate solutions. Every little bit counts.